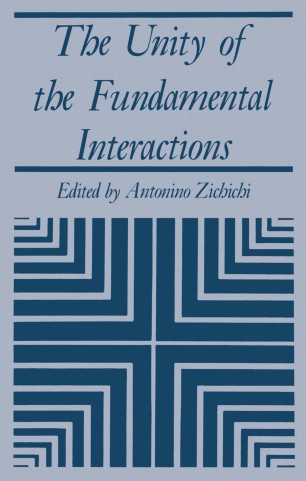 The Unity of the Fundamental Interactions

From 31 July to 11 August 1981, a group of 108 physicists from 75 laboratories in 27 countries met in Erice for the 19th Course of the International School of Subnuclear Physics. The countries re­ presented were Argentina, Australia, Austria, Belgium, Brazil, Bulgaria, Canada, Denmark, the Federal Republic of Germany, Finland, France, Greece, Hungary, India, Israel, Italy, Japan, Korea, the Netherlands, Norway, Poland, Sweden, Turkey, the United Kingdom, the United States of America, Venezuela, and Yugoslavia. The School was sponsored by the Italian Ministry of Public Education (MPI), the Italian Ministry of Scientific and Technological Research (MRST) , the Regional Sicilian Government (ERS), and the Weizmann Institute of Science. The programme of the School was mainly devoted to a review of the most significant results, both in theory and experiment, obtained in the field of high-energy interactions. The outcome of the School was to present a clear picture of how far we are along the fascina­ ting route towards understanding the deep meaning of the natural laws of hadronic and leptonic matter -- the final goal being the unity of all forces.