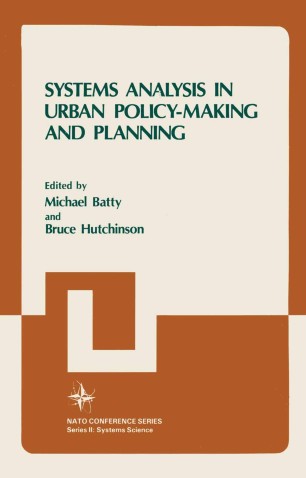 In September 1980, the Special Programme Panel on Systems Sciences of the North Atlantic Treaty Organization (NATO) sponsored an Advanced Research Institute (ARI) on "Systems Analysis in Urban Policy-Making and Planning" which was held at New College, Univer­ sity of Oxford, from 21st to 27th September. This week-long meeting brought together 35 invited delegates from most countries of the NATO Alliance to discuss the impact which syst~ms analysis has had and is likely to have on urban affairs. The manuscript was submitted to the publisher in June of 1982. Although the goal of the ARI was to assess the impact of urban systems analysis as seen through the eyes of those closely involved in such work, the meeting also addressed opportunities for future research and development, and therefore in this book we have attempted to synthesize discussions at the meeting with this in mind. But before we describe the structure of this book, it is worth recounting in a little more detail the intentions and organi­ zation of the meeting, for this has had an important effect on the type of papers produced here, the way they have been written, and the issues they address.