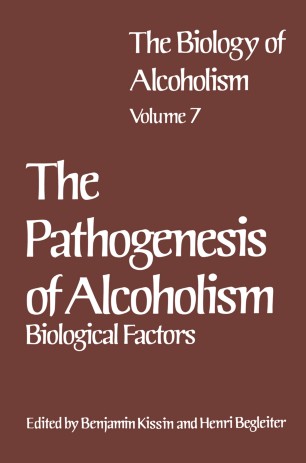 The previous volume, The Pathogenesis of Alcoholism: Psychosocial Factors, attempted to describe the interaction of biological, psychological, and social factors that lead to the initiation and perpetuation of alcoholism. The preface to that volume presented our particular view of the bio-. psycho-social interaction as a progressive process in which earlier developments produce new pathogenetic mechanisms, which in turn lead to still other cyclical feedback activities. Although influences from each of the three phenomenologic levels are at work during each stage of the clinical course, it would appear that social factors are most significant in the early phase, psychological factors at the intermediate level, and biological ones toward the end. These differences are only relative, however, for influences of all three types surely are operative during all stages of the syndrome. This appears to be particularly true for the biological parameters of activity. Don Goodwin (1976), who has supplied much of the data that support the role of hereditary factors in alcoholism, is wont to say that all living behavior is biological-by definition. The operational evidence for this is perhaps more evident in alcoholism than in other syndromes. For example, the general social indifference of many Asians to alcohol may reflect the presence of an atypical isoenzyme of alcohol dehydrogenase rather than some independently derived cultural norm.