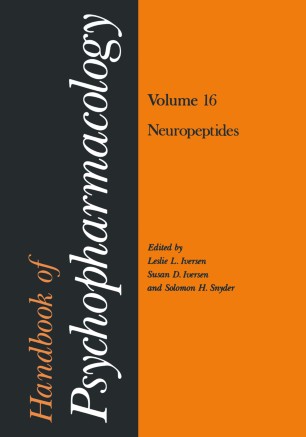 It is now eight years since the first Handbook volumes on Basic Neuro­ pharmacology were published, and there have been many important advances. As in many other areas in science, progress in this field has depended to a considerable extent on the availability of new experimental methods, and Volume 15 reviews some major recent developments, including new autoradiographic techniques that allow direct visualization of drug and transmitter receptors in the nervous system, and the pin­ pointing of the precise locations of the changes in brain metabolism elicited by various drug treatments. Volumes 16 and 17 cover two of the most active areas for basic research in psychopharmacology at the moment: the characterization of drug and transmitter receptors in brain by radioligand binding techniques, and studies of the role of small peptides in brain function. The latter area, in particular, illustrates how rapidly progress continues to be made in basic research on the mechanisms of chemical communication within the nervous system. Eight years ago when the Handbook first appeared none of the opioid peptides (enkephalins and endorphins) had yet been identified. Since then a whole new area of basic biological research has focused on these substances, and in addition we know of more than thirty other neuropeptides with putative eNS trans­ mitter functions.