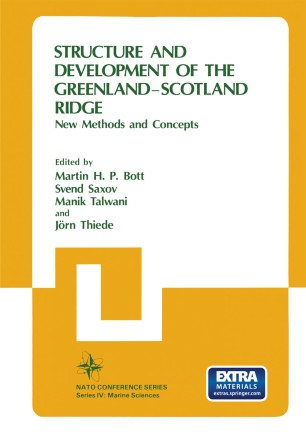 Structure and Development of the Greenland-Scotland Ridge

A group of geoscientists from a number of NATO countries met under NATO sponsorship in Copenhagen on February 27 and 28, 1978, and formulated a proposal entitled "EVOLUTION OF THE GREENLAND­ ICELAND-FAEROE-SCOTLAND RIDGE, A KEY AREA IN MARINE GEOSCIENCE". This part of the North Atlantic Ocean is of particular interest because of its anomalously shallow bathymetry which has profoundly influenced many aspects of the evolution of the North Atlantic. The proposed investigations therefore aim to study the deep crustal structure including relationship of continental and oceanic crust, history of subsidence of the ridge including its past role as a land bridge, age of the oceanic basement along it and its history of formation, and the influence of the ridge on Tertiary and Quaternary depositional palaeoenvironments. In furtherance of this proposal, it is intended to carry out a series of seismic and drilling operations on the Ridge during the coming years. These major marine investigations will be mainly funded from national sources. An important preliminary stage to the project is the collec­ tion and synthesis of available data. NATO has already approved a small budget for this purpose which has enabled a geoscientist to work partly at the Department of Geological Sciences of Durham University, UK, and partly at Lamont-Doherty Geological Observatory of Columbia University, Palisades, USA, for about six months to compile the data. The most important map showing magnetic anomalies and lineations in the area, is included in a pocket at the back of this volume.