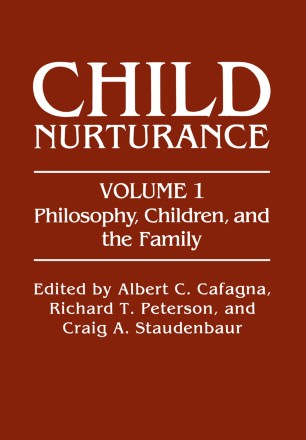 Philosophy, Children, and the Family

The United Nations' designation of 1979 as the International Year of the Child marked the first global effort undertaken to heighten awareness of the special needs of children. Activities initiated during this special year were designed to promote purposive and collaborative actions for the benefit of children throughout the world. Michigan State University's celebration of the International Year of the Child was held from Septem­ ber 1979 through June 1980. A variety of activities focused attention on the multiplicity of factors affecting the welfare of today's children as well as the children of the future. Many people involved with the university were concerned that benefits to children continue beyond the official time allocated to the celebration. The series Child Nurturance is one response to this concern. The first five volumes of Child Nurturance reflect directly the activities held on the Michigan State University campus and consist of original contributions from guest speakers and invited contributors. Subsequent biennial volumes will present original contributions from individuals representing such fields as anthropology, biology, education, human ecology, psychology, philosophy, sociology, and medicine. We hope the material presented in these volumes will promote greater understanding of children and encourage interdisciplinary inquiry into the individual, family, societal and cultural variables which influence their welfare and development. We would . like to express both our thanks and our admiration for who not only typed the camera-ready copy for each of Margaret Burritt the volumes, but also served as general manager of the entire project.