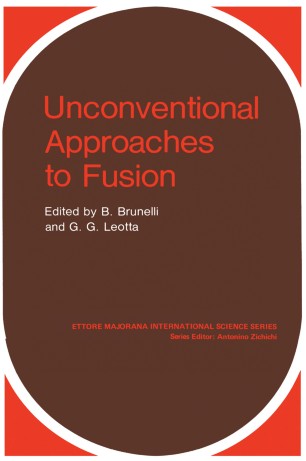 The Erice International School of Fusion Reactor Techno­ logy held its 1981 course on « Unconventional Approaches to Fusion » in combination with the IAEA Technical Committee meeting on « Critical Analysis of Alternative Fusion Concepts ». The two events took place in the second half of March with an overlap of a few days only. The present proceedings include the first week's papers; those presented during the second week will be summarised in Nuclear Fusion. Right from the beginning of the course, and in particular In R. Carruthers' opening talk, it was clear that an uncon­ ventional approach was considered stimulating insofar as its con­ ception presented advantageous aspects with respect to the To­ kamak. Indeed the Tokamak was recognized as an « imper­ fect frame of reference» (K. H. Schmitter) in the sense that, al­ though it deserves to be considered as a frame of reference for the other devices because it is the most advanced in the scientific demonstration of controlled thermonuclear fusion, as a fusion reactor, however, the Tokamak does not seem to be completely satisfactory either from an economic or from an operational point of view, if compared with that « enticing ogre », the proven fission reactor (less enticing to the public). Comparison of a Tokamak reactor with a PWR can be founded on considerations of such a basic nature that it becomes almost automatic to ask how far the various unconventional ap­ proaches to fusion are exempt from the Tokamak's drawbacks.