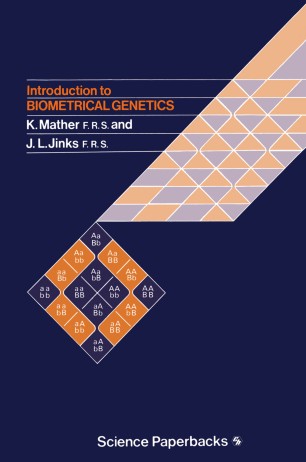 In the second edition of Biometricai Genetics, which appeared in 1971, we set out to give a general account of the subject as it had developed up to that time. Such an account necessarily had to be comprehensive and reasonably detailed. Although it could be, and indeed has been, used by those who were making an acquaintance with this branch of genetics for the first time, it went beyond their needs. We have been encouraged therefore to write an introduction to the genetical analysis of continuous variation aimed primarily at senior undergraduate and postgraduate students, and concentrating on basic considerations, basic principles and basic techniques. This has meant, of course, omitting all reference to some phenomena of more restricted interest, notably sex-linkage, ma­ ternal effects, haploidy and polyploidy. It has meant, too, that even with some phenomena which have been included, like interactions, linkage and effective factors, the discussions cannot go into full detail. Anyone who is interested, however, can find further information in Biometricai Genetics, to which detailed references have been given where it ap­ peared that these would be helpful. The order of presentation has been changed with the aim of making it easier for beginners.