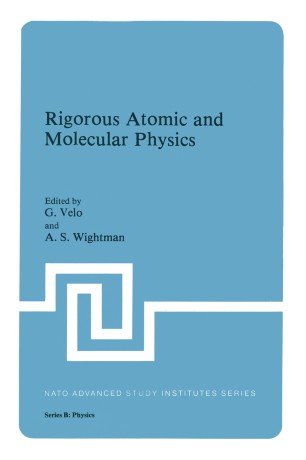 One of the goals of mathematical physics is to provide a rigorous derivation of the properties of macroscopic matter starting from Schrodinger's equation. Although at the present time this objective is far from being realized, there has been striking recent progress, and the fourth "Ettore Majorana" International School of Mathematical Physics held at Erice, 1-15 June 1980 with the title Rigorous Atomic and Mqlecular Physics focussed on some of the recent advances. The first of these is the geometric method in the theory of scattering. Quantum mechanical scattering theory is an old and highly cultivated subject, but, until recently, many of its fundamental developments were technically very complicated and conceptually rather obscure. For example, one of the basic properties of a system of N particles moving under the influence of appropriately restricted short-range plus Coulomb forces is asymptotic completeness: the space of states is spanned by the bound states and scattering states. However, the proof of asymp­ totic. completeness for N bodies was achieved only with physically unsatisfactory restrictions on the nature of the interaction and even for N = 2 required an involved argument rather more subtle than the physical circumstances seemed to warrant. The reader will find in the present volume a very simple and physical proof of asymptotic completeness for N = 2 as well as an outline of the geometrical ideas which are currently being used to attack the problem for N > 2. (See the lectures of Enss.