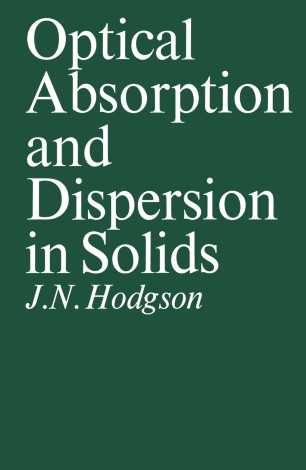 Optical Absorption and Dispersion in Solids

The electromagnetic theory of Maxwell and the electron theory of Lorentz and Drude stimulated a great deal of experimental work on the optical properties of solids in the late nineteenth and early twentieth centuries. The time was not then ripe, however, for general progress in this field. The experimental techniques were not available to produce suitable specimens for optical measurements with well­ defined structure and purity. On the theoretical side, the classical electron theory provided only a very incomplete account of the interaction of light waves with matter. The centre of interest in optical research moved to atomic and molecular spectroscopy where quantitative results were easier to obtain. The quantum theory, starting with Bohr's theory of 1913, provided a highly successful basis for the interpretation of the optical spectra of atoms and molecules. The present-day theory of the optical properties of solids is based on the quantum theory of electrons in solids, developed from the early researches of Sommerfeld and Bloch, and the theory of lattice vibrations originating in the research by Born. The formal con­ nection between optical absorption and electron wave functions in solids has been well known since the 1930s but it is only recently that electron energy band calculations have achieved sufficient accuracy to make profitable a comparison of experimental and theoretical results. Without some guidance from a theoretical band structure calculation, it would be difficult to make any progress with the in­ terpretation of an optical absorption spectrum.