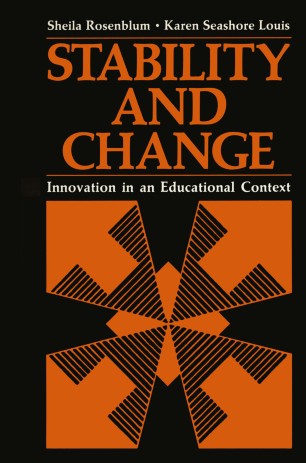 Innovation in an Educational Context

Nearly a century ago, Emile Durkheim founded the sociology of educa­ tion on the French cultural and structural premise that the function of educators is to transmit culture from one generation to the next. The clarity of his vision was aided by the era, the place, and the actors in the learning environment. His was an era when the relatively seamless web of western culture, although ripping and straining, was still intact. The place, post-Napoleonic France, was vertically stratified and elaborately structured. And the teachers had reason to think they were agents of authority, whereas most students, during school hours at least, behaved as if they were the objects of that authority. Underlying the very notion of a sociology of education, then, was a visible and pervasive aura of a system and order that was culturally prescribed. Scholars of American education have yearned for such systems before and since Durkheim. Every European and English model has been emulated in a more or less winsome manner, from the Boston Latin School of the 1700s to the Open Education programs of the 1960s. In the last quarter century of research, it has begun to dawn on us, however, that no matter how hard American educators try, they do not build a system.