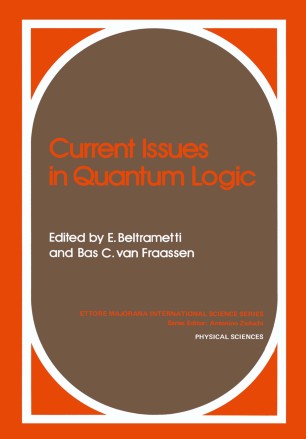 These are the proceedings of the Workshop on Quantum Logic held in Erice (Sicily), December 2 - 9, 1979, at the Ettore Hajorana Centre for Scientific Culture. A conference of this sort was originally proposed by Giuliano Toraldo di Francia, who suggested the idea to Antonino Zichichi, and thus laid the foundation for the Workshop. To both of them we express our appreciation and thanks, also on behalf of the other participants, for having made this conference possible. There were approximately fifty participants; their names and institutions are listed in the text. Quantum logic, which has now a history of some forty or more years, has seen remarkable growth during the sixties and seventies. The papers in the present volume presuppose, by and large, some acquaintance with the elements of the subject. These may be found in the well-known books by J.H. Jauch (Foundations of Quantum Hechanics; Reading, 1968), V.S. Varadarajan (Geometry of Quantum Theory: Princeton, 1968), and C. Piron (Foundations of Quantum Theory; New York, 1976). The initial program for the conference listed about twenty-five invited papers. But in the context of a very active and qualified attendance, other contributions were offered. This volume contains all of them. The program listed six main topics: I. Classification or different areas of quantum logic, and open problems. II. Comparison and unification of different approaches to quantum theories; problems of interpretation. III. Formal quantum logic; axiomatics. IV. Hodal interpretations of quantum logic. v vi FOREWORD V. Quantum set theory.