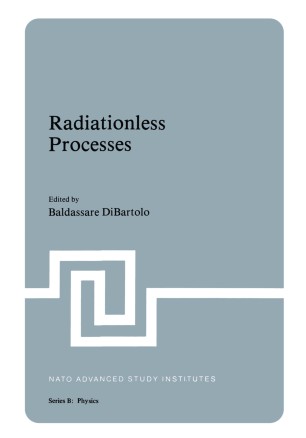 This book presents an account of the NATO Advanced Study Institute on "Radiationless Processes," held in Erice, Italy, from November 18 to December 1, 1979. This meeting was organized by the International School of Atomic and Molecular Spectroscopy of the "Ettore Majorana" Centre for Scientific Culture. The objective of the Institute was to formulate a comprehensive treatment of the various processes by which molecules and crystals in excited electronic levels relax nonradiatively to the ground level. A total of 83 participants came from 62 laboratories and 22 nations (Australia, Belgium, Brasil, Canada, Czechoslovakia, France, F. R. Germany, Greece, Hungary, India, Ireland, Israel, Italy, Mexico, The Netherlands, Poland, Portugal, Switzerland, Turkey, United Kingdom, United States, and U.S.S.R.). The secretaries of the Institute were: Velda Goldberg for the scientific aspects and Antonino La Francesca for the administrative aspects of the meeting. Eleven series of lectures for a total of 36 hours were given. Nine "long" seminars and 7 "short" seminars were also presented. In addition, two informal seminars and 2 round-table discussions were held. After an introductory overview of the theory of radiation1ess processes, the Institute dealt firstly with the interaction of electrons with the distribution of vibrational modes in simple molecules, then with the increasingly complex situation found in large lsolated molecules, gnd finally with the coupling of excited electrons with the continuous phonon distribution in insulating solids.