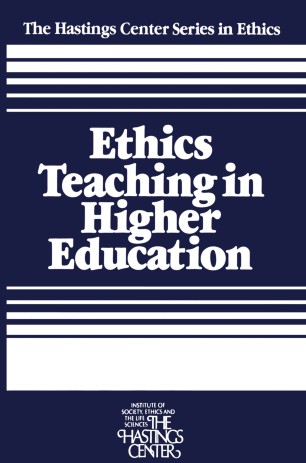 A concern for the ethical instruction and formation of students has always been a part of American higher education. Yet that concern has by no means been uniform or free from controversy. The centrality of moral philosophy in the undergraduate curriculum during the mid-19th Century gave way later during that era to the first signs of increasing specialization of the disciplines. By the middle of the 20th Century, instruction in ethics had, by and large, become confined almost exclusively to departments of philosophy and religion. Efforts to introduce ethics teaching in the professional schools and elsewhere in the university often met with indifference or outright hostility. The past decade has seen a remarkable resurgence of the interest in the teaching of ethics, at both the undergraduate and the professional school levels. Beginning in 1977, The Hastings Center, with the support of the Rockefeller Brothers Fund and the Carnegie Corporation of New York, undertook a system­ atic study of the state of the teaching of ethics in American higher education.