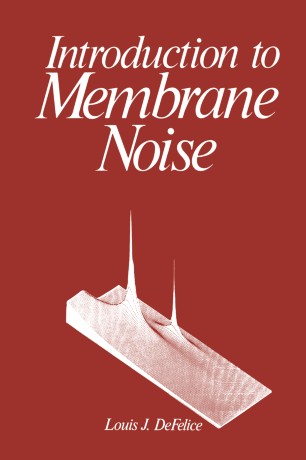 I started working on membrane noise in 1967 with David Firth in the Department of Physiology at McGill University. I began writing this book in the summer of 1975 at Emory University under a grant from the National Library of Medicine. Part of the writing was also done at the Marine Biological Laboratory Library in Woods Hole and in the Library of the Stazione Zoologica in Naples. I wrote this book because in the intervening years membrane noise became a definable subdivision of membrane biophysics and seemed to deserve a uniform treatment in one volume. Not surprisingly, this turned out to be much more difficult than I had imagined and some areas of the subject that ought to be included have been left out, either for reasons of space or because of my own inability to keep up with all aspects of the field. This book is written for biologists interested in noise and for physicists and electrical engineers interested in biology. The first three chapters attempt to bring both groups to a common point of understanding of electronics and electrophysiology necessary to the study of noise and impedance in membranes. These chapters arose out of a course given over a period of six years to electrical engineers from the Georgia Institute of Technology and biologists from Emory University School of Medicine.