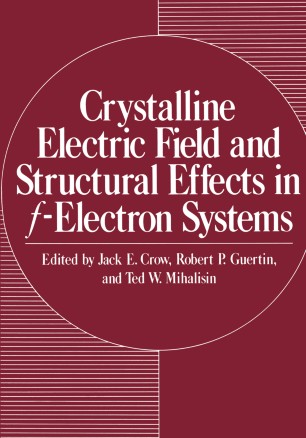 Perhaps the title of this conference "Ctystalline Electric Field and Structural Effects in f-Electron Systems" reflects best the growth and direction of the field. The title and the conference itself go beyond "CEF" in two broad and important respects. First, the inter-relations between CEF and mode softenings, distortions due to quadruplar ordering or the Jahn­ Teller effect, have gained greater focus, hence the inclusion of . •• "Structral Effects. " Second, much greater emphasis on the actinides and, in particular, comparisons between actinides and the lighter rare earths is seen in this conference, hence the more general terminology . . . Iff-Electron Systems. " It seems clear that this comparison will lead to an extension to the actinides of mixed valence and Kondo considerations, as well as CEF effects. The emergence of a broader discipline which includes all f-electron systems and which is concerned with unstable, as well as stable, valence reflects the maturation of the field and a coming to grips with the complexity, as well as the unity, of f-electron systems. This maturation is also seen in the growing realization of the effects of CEF on transport, thermodynamic properties, and superconductivity and its co-existence with magnetic order. This volume contains 63 articles, all but two of which were presented at the Conference held in Philadelphia, U. S. A. , on 12-15 November, 1979. About 100 conferees from 13 countries attended the meeting which consisted of four full days of lecture presentations.