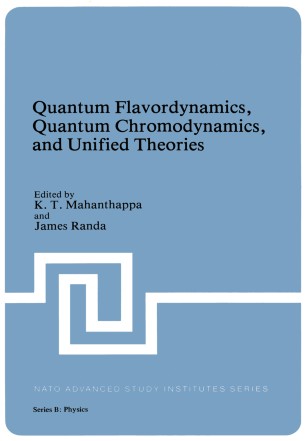 The Advanced Study Institute on Quantum Flavordynamics, Quantum Chromodynamics and Unified Theories was held on the campus th of the University of Colorado at Boulder from July 9 through July 27th of 1979. There has been a rapid progress in the understanding of weak, electromagnetic and strong interactions and their unification during the past few years. The purpose of the Institute was to have a group of lecturers active in these areas of research give a series of lectures on various aspects of these topics beginning at the elementary level and ending with the up-to-date developments. There were three lecturers, Professors S. Ellis, R. Field and C. H. Llewellyn Smith who covered the different but related aspects of Quantum Chromodynamics. Their lectures were well coordinated, but some overlap was inevitable. Dr. Buras gave two lectures on QCD corrections beyond the leading order. Professor D. Gross covered the nonperturbative aspects and a possible mechanism of quark confinement. At a more phenomenological level, Professor C. De Tar covered the bag models. The subject matter of electro­ weak interactions was covered by Professor G. Altarelli. Professor J. Wess gave six lectures on supersymmetry and supergravity. All these lectures with the exception of those of Professor D. Gross are incorporated in this volume. The contents of Professor Gross' lectures are available elsewhere and therefore only references and problems are included here. In addition to the above lectures, there were workshop-like discussion sessions.