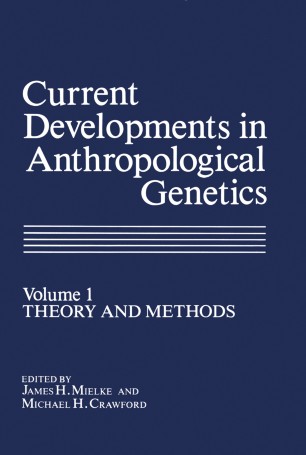 The papers in this volume were presented as part of the University of Kansas Department of Anthropology Distinguished Lecture Program on Anthro­ pological Genetics. Consecutively, each contributor spent approximately a week on the campus at Lawrence participating in a seminar. The contributors to this volume were not on campus at one time, but visited us on alternating weeks; hence, a symposium-type interchange was not possible between all participants. However, the students and faculty of Kansas University acted as a sounding board. This volume can be considered a companion and continuation of Methods and Theories of Anthropological Genetics, which was based upon a symposium on the state of the art in 1971. This present volume reflects what we consider to be some of the advances and current developments in anthropological genetics since 1973. Emphasis has shifted, to some degree, away from population struc­ ture analysis (as depicted in Crawford and Workman) to genetic epidemiology. However, population structure still remains a fertile and ongoing area of research with many theoretical questions still remaining unanswered.