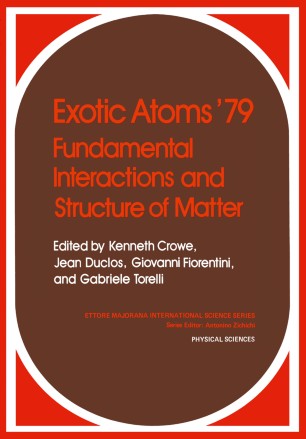 The second course of the International School on the Physics of Exotic Atoms took place at the "Ettore Majorana" Center for Scien­ tific Culture, Erice, Sicily, during the period from March 25 to April 5, 1979. It was attended by 40 participants from 23 insti­ tutes in 8 countries. The purpose of the course was to review the various aspects of the physics of exotic atoms, with particular emphasis on the re­ sults obtained in the last two years, i.e., after the first course of the School (Erice, April 24-30, 1977). The course dealt with two main topics, A) Exotic atoms and fundamental interactions and B) Applications to the study of the structure of matter. One of the aims of the course was to offer an opportunity for the exchange of experiences between scientists working in the two fields. In view of this, the lectures in the morning discussed the more general arguments in a common session, whereas the more specialized topics were treated in the afternoon, in two parallel sections. Section A was organized around four main subjects, briefly pos­ itronium and muonium, quarkonium, baryonium and neutral currents in atomic physics. In addition various progresses were reported in muon and antiproton physics.