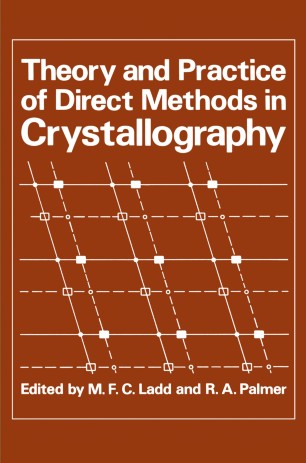 Theory and Practice of Direct Methods in Crystallography

Direct methods of crystal structure determination are usually associated with techniques in which phases for a set of structure factors are determined from the corresponding experimental amplitudes by probabilistic calcula­ tions. It is thus implied that such ab initio phase calculations do not require a knowledge of atomic positions, and this basis distinguishes direct methods from other techniques for structure determination. An acceptably wider interpretation of the term direct methods leads to other important applica­ tions involving, inter alia, the use of heavy atoms, resolution-limited phase data for large molecules, rotation functions, and Fourier series. These topics are discussed in the later chapters of this book. Although some earlier theoretical investigations were made by Harker and Kaspar, direct methods may be considered to have begun around the year 1950. Important landmarks in the development of the subject include the book by Hauptmann and Karle, The Centrosymmetric Crystal (1953), the definitive paper by Karle and Karle in Acta Crystallographica (1966), and the recent (1978) sophisticated program package MULTAN 78 produced mainly by Germain, Main, and Woolfson. Woolfson's book, Direct Methods in Crystallography, was published in 1961, but because of the rapid progress in direct methods, much of it soon became outmoded. It is interesting to note that direct methods nearly came into being many years earlier. Certainly the E2 relationship was used implicitly by Lonsdale in 1928 in determining the crystal structure of hexamethylbenzene.