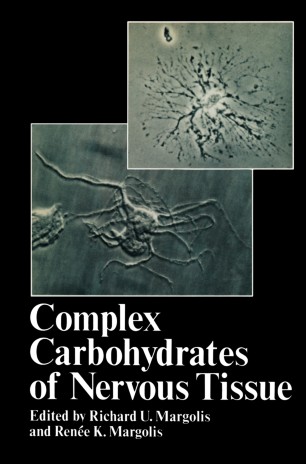 It is only relatively recently that neurochemists and neurobiologists have shown appreciable interest in the class of macromolecules now generally re­ ferred to as complex carbohydrates, although gangliosides were, of course, first identified and studied in brain. The glycosaminoglycans fell chiefly within the province of connective-tissue biochemists, and earlier informa­ tion concerning the structure and metabolism of glycoproteins was largely limited to the more accessible glycoproteins and oligosaccharides (such as those found in plasma, milk, and urine), or ones which are relatively simple to prepare in a soluble and manageable form. Techniques were later devised for the isolation and purification of tightly bound membrane glycoproteins, where initial studies concentrated mainly on the erythrocyte, for which large amounts of a single cell population are available. Because of the structural complexity of nervous tissue and the large numbers, low concentrations, and membrane-bound form of many of its complex carbohydrates, progress has occurred more slowly in this area.