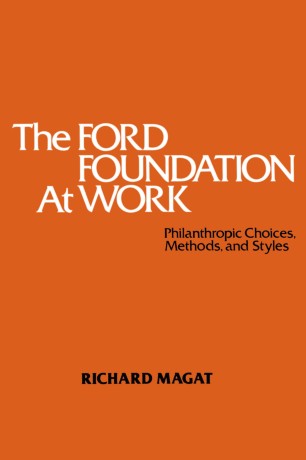 The Ford Foundation at Work

This report originated in a request to me from the Board of Trustees of the Ford Foundation in the summer of 1975. The trustees, aware that there would be a change of leadership at the Foundation be­ fore 1980, wanted to make a running start in the process of plan­ ning for the future. Their first step was to make a study of the great national and international needs that might lie ahead in the next decade and a half, and where and how the Foundation might ad­ dress them. They sought advice both within the Foundation and outside it, and they engaged in long discussions of their own. Although the exercise was directed toward planning for the future, the trustees also wished to review our past, not exhaus­ tively but at least well enough to have a clear sense of what the Foundation had been up to in the quarter century of its existence as a national and international institution. In this connection, the chairman of our board, Alexander Heard, asked for /I a canvass of the Ford Foundation's experiences, successes, and failures during the last twenty-five years . . . [focused] on the broad objectives sought, the means pursued to achieve them, and the results.