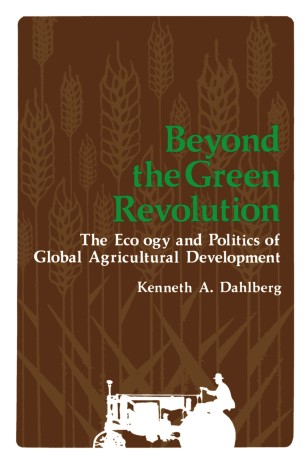 Beyond the Green Revolution

The Ecology and Politics of Global Agricultural Development

This book, which is the result of an intellectual odyssey, began as an attempt to explore and map the environmental and cross-cultural dimensions of the continuing spread of the green revolution-that package of high-yielding varieties of grain, fertilizers, irrigation, and pesticides that constitutes the core of modern industrial agriculture. In the process of traversing the terrain of several intellectual traditions and cutting through various disciplinary forests and thickets, a number of striking observations were made-all leading to two sober­ ing conclusions. First, most intellectual maps dealing with agriculture fail to recognize it as the basic interface between human societies and their environment. Because of this, they are little better than the "flat earth" maps of earlier centuries in helping to understand global realities. Second, when agriculture is analyzed from a global perspec­ tive that takes evolution seriously, one sees that the ecological risks as well as the energy and social costs of modern industrial agriculture make it largely inappropriate for developing countries. Beyond that, one can see a great need within industrialized countries to develop less costly, less risky, and more sustainable agricultural alternatives. Early in the journey it became clear that conventional disciplinary approaches were inadequate to comprehend the scope and diversity of global agriculture and that a new multilevel approach was needed. It also became clear that any new approach would have to try to correct certain Western biases and blind spots.