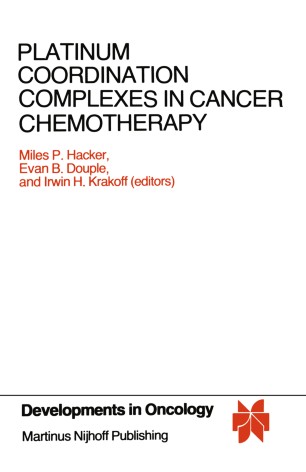 Proceedings of the Fourth International Symposium on Platinum Coordination Complexes in Cancer Chemotherapy convened in Burlington, Vermont by the Vermont Regional Cancer Center and the Norris Cotton Cancer Center, June 22–24, 1983

Part of the Developments in Oncology book series (DION, volume 17)

The idea for convening a Fourth International Symposium on Platinum Coordination Complexes in Cancer Chemotherapy was born in an assembly of researchers from the Vermont Regional Cancer Center and the Norris Cotton Cancer Center who shared a common interest in metal complexes. It was agreed by those assembled that sufficient time had passed since the Third International Symposium on Platinum Coor­ dination Complexes in Cancer Chemotherapy held in 1976 at the Wadley Institutes of Molecular Medicine in Dallas, Texas, during which several advances in the chemistry, biochemistry, pharmacology and clinical use of platinum complexes had occurred, to warrant a fourth symposium. Furthermore, intensive investigations in progress were bringing sophisticated methodologies to bear on the problems in the field, clinical trials were yielding interesting results, and unique approaches to cancer therapy were being designed. Therefore, an organizing committee was formed and planning culminated in the symposium which was held in Burlington, Vermont, June 22-24, 1983.