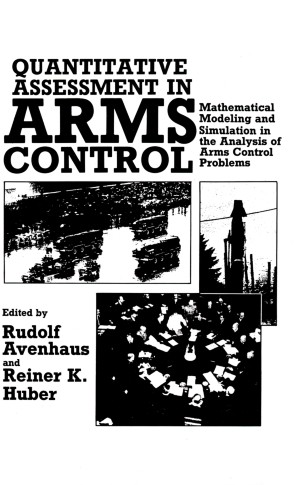 Mathematical Modeling and Simulation in the Analysis of Arms Control Problems

This book originates in a series of contributions to the 1983 Systems Science Seminar at the Computer Science Department of the German Armed Forces University Munich. Under the topic "Quantita­ tive Approaches to Arms Control" that seminar attempted to review the present state-of-the-art of systems analysis and numerate meth­ ods in arms control. To this end, the editors invited a number of experts from Europe, the United St~tes and Canada to share and dis­ cuss their views and assessments with the faculty and upper class computer science students of the university as well as numerous guests from the defence community and the interested public. In three parts, this book presents a selection of partly re­ vised and somewhat extended versions of the seminar presentations followed, in most cases, by brief summaries of the transcripts of the respective discussions. In addition to an introduction by the editors, part I contains six papers on the present state and prob­ lems of arms control with emphasis on START (Strategic Arms Re­ duction Talks), INF (Intermediate-range Nuclear Forces negotia­ tions), and MBFR (Mutually Balanced Force Reduction talks). The seven contributions to part II are devoted to mathematical models of arms competition and quantitative approaches to force balance assessment of both, the static and dynamic variety. Part III pre­ sents five papers which address technical and operational aspects and legal implications of arms control negotiations and verifica­ tion.