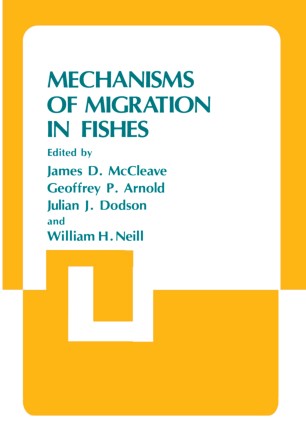 Mechanisms of Migration in Fishes

The last major synthesis of our knowledge of fish migration and the underlying transport and guidance phenomena, both physical and biological, was "Fish Migration" published 16 years ago by F.R. Harden Jones (1968). That synthesis was based largely upon what could be gleaned by classical fishery-biology techni.ques, such as tagging and recapture studies, commercial fishing statistics, and netting and trapping studies. Despite the fact that Harden Jones also provided, with a good deal of thought and speculation, a theoretical basis for studying the various aspects of fish migration and migratory orientation, progress in this field has been, with a few excepti.ons, piecemeal and more disjointed than might have been expected. Thus we welcomed the approach from the NATO Marine Sciences Programme Panel and the encouragement from F.R. Harden Jones to develop a proprosal for, and ultimately to organize, a NATO Advanced Research Institute (ARI) on mechanisms of fish migration. Substantial progress had been made with descriptive, analytical and predictive approaches to fish migration since the appearance of "Fish ~ligration." Both because of the progress and the often conflicting results of research, we felt that the time was again right and the effort justified to synthesize and to critically assess our knowledge. Our ultimate aim was to identify the gains and shortcomings and to develop testable hypotheses for the next decade or two.