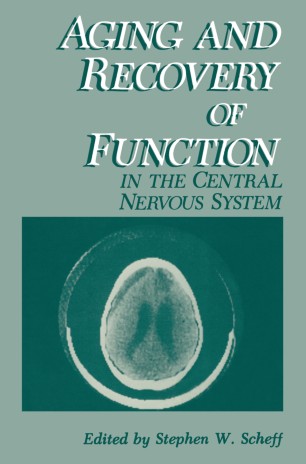 Aging and Recovery of Function in the Central Nervous System

The mammalian central nervous system is a remarkable structure which has attracted many new investigators, as evidenced by the dramatic increase in scientific publications dealing with neurobiology. Every day basic scientists conduct new and exciting experiments, resulting in remarkable discoveries des­ tined to help mankind. Unfortunately many of these new findings are slow to be accepted by the clinical world. This is especially true in the area of brain trauma, where the present prognosis is usually very poor. We have known for quite some time that the mammalian central nervous system is capable of compensating for severe damage in many different ways, and under some circumstances behav­ ioral compensation can be observed. However, much is still to be learned about the various factors and events that lead to functional recovery and those condi­ tions that do not. It is this challenge that originally excited a number of the contributors to this volume to explore the subject of recovery from brain damage. One factor in particular that is known to change the prognosis of recovery is the age of the organism at the time of the damage. This book is an attempt to explore this important variable. Most of the literature concerning aging deals with widespread degenerative changes and paints a grim picture for the aging central nervous system in terms of recovery of function following trauma.