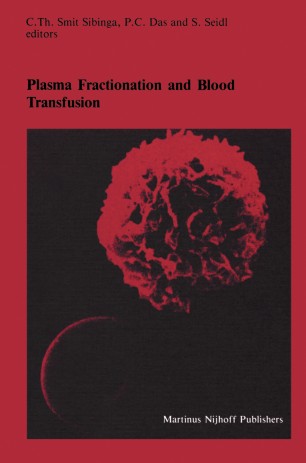 Part of the Developments in Hematology and Immunology book series (DIHI, volume 13)

Plasma fractionation and blood transfusion are inherently linked. Blood­ bankers need to have a sincere interest in fractionation and purification techniques in order to understand the need for carefully controlled source material collection and initial processing. Developments point to a shift in technology, implementation and application of plasma fractions to be produced, such that early anticipation from both bloodbankers and fractionators in a joint interest and effort are needed. As usual there is good news and bad news. We are referring in that respect to the exciting presentation about the future of bloodbanking. Although the blood donor still plays a major role in bloodbanking, new technologies could terminate the conventional blood transfusion service in the next 20-40 years. Sooner or later DNA technology will play an important role in bloodbanking and bloodbankers will have to deal with cultivated red cells as a replacement of our donor blood. Several fractionation techniques like column chromatography, controlled pore glass chromatography, heparin double cold precipitation technology and polyelectrolite fractionation are available, which may result in better yields for some of the plasma proteins. These techniques are likely to replace in part the old Cohn fractionation in the near future.