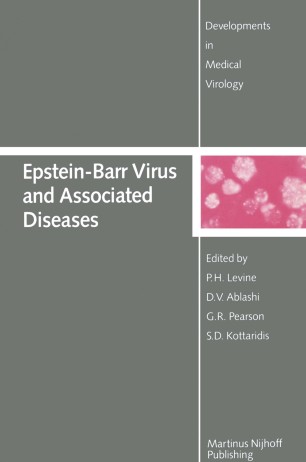 It has been slightly more than two decades since the Epstein-Barr virus (EBV) was discovered by Prof. M.A. Epstein and his colleagues at the University of Bristol in their search for the causative agent of Burkitt's lymphoma. For several years EBV was a "virus in search of a disease." The first documentation that EBV was pathogenic for humans was in 1969 when Drs. Gertrude and Werner Henle identified it as the causative agent for infectious mononucleosis. Seroepidemiologic and biochemical studies subsequently linked EBV to Burkitt's lymphoma (BL), nasopharyngeal carcinoma (NPC), and more recently to the X-linked lymphoproliferative syndrome. With its widespread pattern of infection and a predilection for producing clinical signs and symptoms in only certain individuals, EBV has provided a model for many other candidate oncogenic viruses, including papilloma viruses, herpes simplex, and HTLV/LAV. In 1975, an international workshop was sponsored by the National Cancer Institute to address the problem of EBV production, thus facilitating basic research on the virus. This proved to be the last international meeting on EBV for almost a decade. In the past, progress in both clinical and basic research on EBV has been presented in two types of international meetings, the international herpesvirus workshops devoted primarily to basic research on both human and animal herpesviruses, and the international symposia on NPC, in which EBV-related studies were interspersed with clinical, epidemiologic and other etiologic aspects of this important human neoplasm.