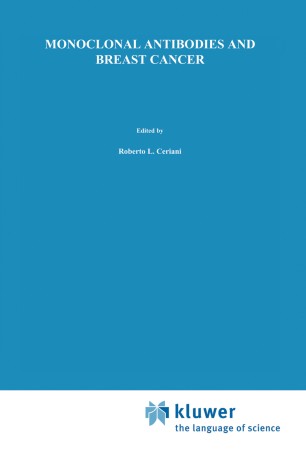 Part of the Developments in Oncology book series (DION, volume 35)

Breast cancer, being a disease with very high prevalence in the female population, has permanently attracted the attention of biologists, biochemists, pathologists, surgeons, and oncologists. In the U.S. alone approximately 120,000 new cases are diagnosed and 37,000 deaths a year are recorded as an outcome. Early diagnosis, clear cut prognosis and the hope of new therapeutic approaches has spurred the enthusiasm of researchers, who with the advent of newer methodologies, tried to employ it in different approaches to the breast cancer patient. In spite of the efforts devoted towards the creation of new approaches, reagents and procedures taking advantage of special characteristics of the breast tissue were slow to come. In general, most diagnostic and prognostic techniques were those shared and applied to other carcinomas. In the early seventies we discovered the first sets of antigens associated with breast epithelial tissue both in the mouse and the human. The recognition of such group of molecules, present in the milk fat globule membrane, gave impetus to several studies in these areas. These mammary cell surface antigens proved useful in several diagnostic approaches such as radioimaging, histochemical and serum assay procedures. However, the apparently inherent limitations of polyclonal antibodies reduced the impact of these novel approaches.