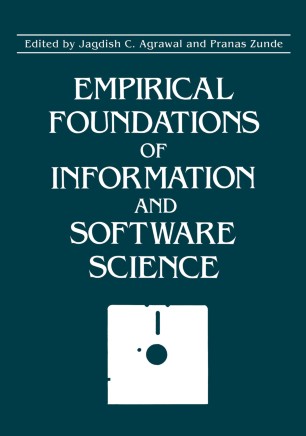 The purpose of the Second Symposium on Empirical Foundations of Informa­ tion and Software Science (EFISS) was, in essence, the same as that of the First Symposium in this series, i. e. to explore subjects and methods of sci­ entific inquiry which are of fundamental and common interest to information and software sciences, and to map directions of research that will benefit from the mutual interaction of these two fields. In fact, one of the most important results of the First EFISS Symposium was the conclusion that the commonality of these two sciences is much more than just the commonality of their objects of study, namely, the study of informative and prescriptive properties of texts in all kinds of sign sys­ tems (such as natural or artificial languages). Rather, the most challeng­ ing problems appear to be in the areas in which both these sciences overlap, such as, for instance, the problem of trade-offs between informative and prescriptive uses of texts. This problem can be formulated in generic terms as follows: given a certain kind of action or activity which has been pre­ scribed to some agent, i. e. which is required to be implemented or carried out, what kind of information should be provided to the agent, in what form, and how should it be distributed over the contextual structure of the pre­ scriptive text to enable the agent to carry out the action or activity most effectively and efficiently.