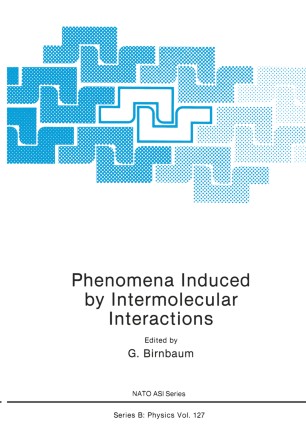 This book is concerned with recent experimental and theoretical work dealing with phenomena created by the transient dipoles and polarizabilities produced by intermolecular interactions. The for­ mer produce absorption from the microwave to the optical regions of the spectrum and the latter produce Rayleigh and Raman scattering; such absorption and scattering would be absent without collisions. Static properties, such as dielectric constant, refractive index, and Kerr effect, also exhibit the effects of induced dipoles and polarizabilities. The first observation of an infrared absorption spectrum pro­ duced by the collisions of molecules which ordinarily do not have an allowed dipole transition was reported in 1949 (Crawford, Welsh, and Locke). The first observation of depolarized Rayleigh spectra due to collisions in atomic gases appeared in 1968 (McTague and Birnbaum). However, it was not until 1977 that the first conference dealing with collision-induced phenomena was organized by J. D. Poll at the University of Guelph. This conference was mainly concerned with studies of collision-induced absorption in gases. Light scat­ tering received more attention at the second meeting of the colli­ sion-induced community in 1978, at the E. Fermi Summer School on "Intermolecular Spectroscopy and Dynamical Properties of Dense Sys­ tems," organized by J. Van Kranendonk. However, the emphasis was still on collision-induced absorption in compressed gases, although some work on liquids, solid H , and related subjects such as ro­ 2 tational relaxation was included. The third induced phenomena con­ ference, organized by F.