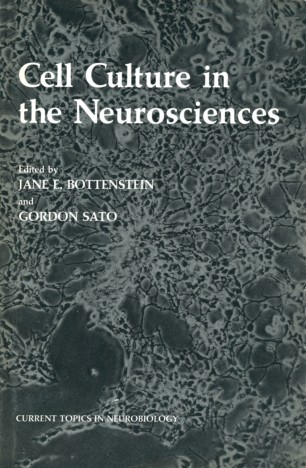 Cell Culture in the Neurosciences

Part of the Current Topics in Neurobiology book series (CTNB)

A fundamental problem in neuroscience is the elucidation of the cellular and molecular mechanisms underlying the development and function of the nervous system. The complexity of organization, the heteroge­ neity of cell types and their interactions, and the difficulty of controlling experimental variables in intact organisms make this a formidable task. Because of the ability that it affords to analyze smaller components of the nervous system (even single cells in some cases) and to better control experimental variables, cell culture has become an increasingly valuable tool for neuroscientists. Many aspects of neural development, such as proliferation, differentiation, synaptogenesis, and myelination, occur in culture with time courses remarkably similar to those in vivo. Thus, in vitro methods often provide excellent model systems for investigating neurobiological questions. Ross Harrison described the first culture of neural tissue in 1907 and used morphological methods to analyze the cultures. Since that time the technique has been progressively modified and used to address an ever widening range of developmental questions. In recent years a con­ vergence of new or improved cell culture, biochemical, electrophysiol­ ogical, and immunological methods has occurred and been brought to bear on neurobiological questions. This volume is intended not to be comprehensive but rather to highlight some of the latest findings, with a review of previous important work as well, in which combinations of these methods are used.