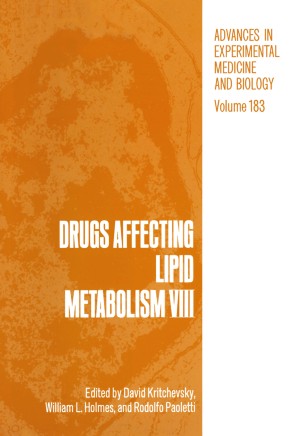 The Proceedings of the Eight International Symposium on Drugs Affecting Lipid Metabolism (8th D.A.L.M.) is the subject of this volume. Since the first symposium in 1960, each successive meeting has broken new ground in the field of pharmacological control of lipid levels - offering new and stimulating insights and exposing the audience to the state of the art. The field has progressed sufficiently to permit discussion of the cellular biology of athero­ sclerosis. The opening session was devoted to pathology, macrophages, lipoproteins and their receptors and choles­ terol ester metabolism. Because of the recent emergence of new apolipoprotein technology, a workshop devoted sole­ ly to apolipoprotein methodology was introduced followed by a plenary session devoted to their metabolism and structure. Another rapidly developing area of atherosclerosis research is non-invasive assessment of this condition. Accordingly, a session was devoted to new techniques for this research modality. The final plenary sessions were devoted to the roles of drugs and diet in athero~ scl~rosis - cause, treatment and mechanisms of action. The meeting was summarized by Dr. O.J. Pollak, one of the "founding fathers" of this field. There were nine sessions of proffered papers whose abstracts appear in this volume. In addition, special workshops (to be reported elsewhere) were devoted to several drugs including Oiyzanol, Probucol and Etofibrate.