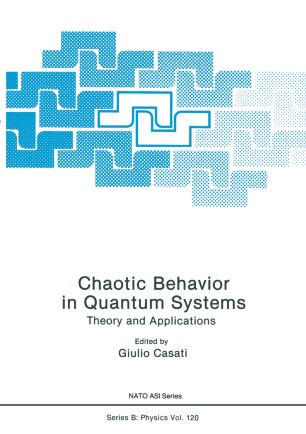 Six years ago, in June 1977, the first international conference on chaos in classical dynamical systems took place here in Como. For the first time, physicists, mathematicians, biologists, chemists, economists, and others got together to discuss the relevance of the recent progress in nonlinear classical dynamics for their own research field. Immediately after, pUblication of "Nonlinear Science Abstracts" started, which, in turn, led to the Physica D Journal and to a rapid increase of the research activity in the whole area with the creation of numerous "Nonlinear Centers" around the world. During these years great progress has been made in understanding the qualitative behavior of classical dynamical systems and now we can appreciate the beautiful complexity and variety of their motion. Meanwhile, an increasing number of scientists began to wonder whether and how such beautiful structures would persist in quantum motion. Indeed, mainly integrable systems have been previously con­ sidered by Quantum Mechanics and therefore the problem is open how to describe the qualitative behavior of systems whose classical limit is non-integrable. The present meeting was organized in view of the fact that scientists working in different fields - mathematicians, theoretical physicists, solid state physicists, nuclear physicists, chemists and others - had common problems. Moreover, we felt that it was necessary to clarify some fundamental questions concerning the logical basis for the discussion including the very definition of chaos in Quantum Mechanics.