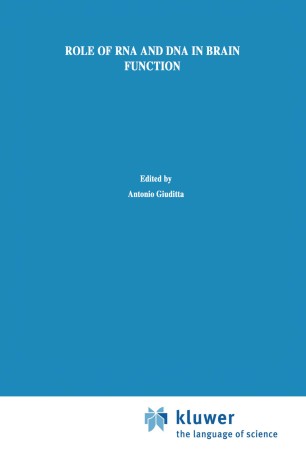 Role of RNA and DNA in Brain Function

Part of the Topics in the Neurosciences book series (TNSC, volume 3)

There was once an old Chinese man working on a hill with a boy. On the plain, near the sea, rested the village, the inhabitants eagerly engaged in their daily activities. Suddenly, the old man noticed that a huge wave, far distant in the sea, was approaching the shore endangering all. The only safe place was the hill. So, he began waving his hands and screaming aloud, to no avail. The villagers were too busy with their own work and paid little heed to the old man, who was considered a bit eccentric. But soon flames were on the hill, the wheat fields ablaze. The old man had resorted to this ultimate step to alert his fellow citizens. Now, they all went running towards him, angry about their burning crop, and in the process, avoided the imminent danger. For some mysterious reason, my mind focused on this story prior to the Symposium on the Role of DNA, which took place in Ravello, Italy at the end of May 1985. Having made a call for people to meet and reflect for a few days, the analogy began to take shape. Ravello was indeed a hill, magically overlooking the sea from medieval quarters. True, its countryside is filled with vineyards, not wheat fields, but that is an improvement on the story. However, what was the wave? Perhaps, the growing amount of data on cloned brain genes that threatens to engulf neurobiologists.