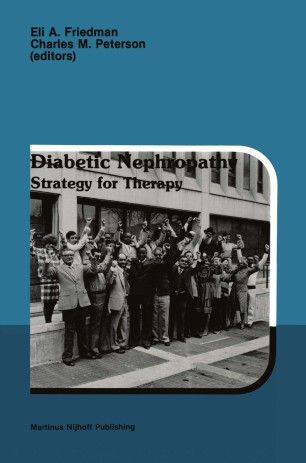 Part of the Developments in Nephrology book series (DINE, volume 9)

Diabetic nephropathy is a tragic illness. Its often insidious onset in the insulin­ dependent (type I) diabetic, typically a young adult, heralds the last act in the course of a disease that will increasingly become the dominant preoccupation in the patient's shortened life. For most type II diabetics, the beginning of clinical renal insufficiency is but a phase in a continuous deterioration that affects the integrity ofjob, marriage, and family. The nephropathic diabetic is hypertensive, has worsening retinopathy, and more often than not, is also plagued by peripheral vascular insufficiency, heart disease, gastrointestinal malfunction, and deepening depression. Until the 1980's, few type I diabetics who became uremic (because ofdiabetic nephropathy) lived for more than two years. Hardly any attained true rehabilitation. This dismal prognosis is changing substantially for the better. Research in diabetes has resulted in striking advances at both ends of the type I diabetic's natural history. In one exciting clinical trial now underway in London, Ontario, halfofchildhood diabetics treated with cyclosporine within six weeks of onset evince"permanent" disappearanceofhyperglycemia and the need for insulin. At the otherendofthe natural historyofdiabetes for the nephropathic patientwith worsening eye disease (renal-retinal syndrome), who receives a kidney transplant, patient and graft survival, two years after cadaveric kidney transplantation in type I diabetics is now equal to that of the nondiabetic.