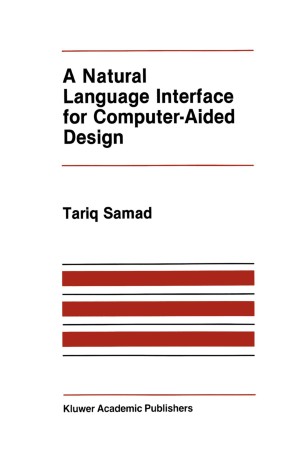 Part of the The Kluwer International Series in Engineering and Computer Science book series (SECS, volume 14)

The advent of computer aided design and the proliferation of computer aided design tools have been instrumental in furthering the state-of-the­ art in integrated circuitry. Continuing this progress, however, demands an emphasis on creating user-friendly environments that facilitate the interaction between the designer and the CAD tool. The realization of this fact has prompted investigations into the appropriateness for CAD of a number of user-interface technologies. One type of interface that has hitherto not been considered is the natural language interface. It is our contention that natural language interfaces could solve many of the problems posed by the increasing number and sophistication of CAD tools. This thesis represents the first step in a research effort directed towards the eventual development of a natural language interface for the domain of computer aided design. The breadth and complexity of the CAD domain renders the task of developing a natural language interface for the complete domain beyond the scope of a single doctoral thesis. Hence, we have initally focussed on a sub-domain of CAD. Specifically, we have developed a natural language interface, named Cleopatra, for circuit-simulation post-processing. In other words, with Cleopatra a circuit-designer can extract and manipulate, in English, values from the output of a circuit-simulator (currently SPICE) without manually having to go through the output files produced by the simulator.