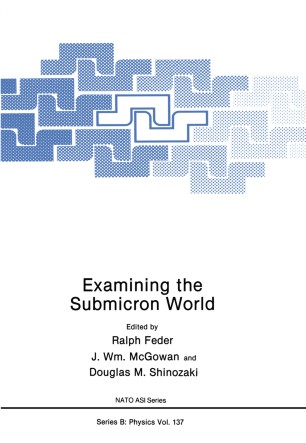 An Institute like ours cannot help but lend credence to the notion of the late Derek J. de Solla Price of Yale University that "the scientific revolution was largely the improvement, invention and use of a series of instruments . . . . that expanded the reach of science in innumerable directions". Most of science today and in years gone by depends on the experimental observation of struc­ ture on the small scale with microscopes, and on the large scale with telescopes. The first instruments to expand the observational range of the human eye were simple optical systems, designed in the case of microscopes and telescopes to magnify the image. The big breakthrough in the 17th century was not when Galileo first turned his telescope to the heavens, but when improvements in lens-grinding techniques allowed eyeglass makers to make the first telescope. Early microscopy revealed new and previously unsuspected microstruc­ tures in biological and non-biological materials and thus helped to enlarge on the understanding of the relationship between structure and properties. The natural inclination of all microscopists, the desire to observe ever smaller structures, was satisfied by the construction of higher quality optical systems which reduced the aberrations limiting the usable magnification. The modem optical microscope is the result of this evolution in design and construction, and it can be operated easily to achieve close to the theoretical resolution.