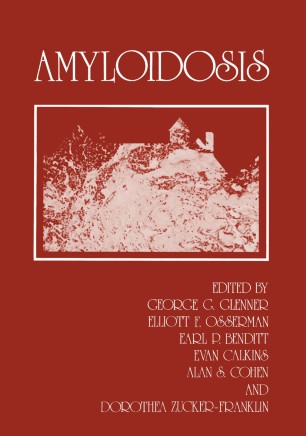 From a process that from the days of Vir chow and Rokitansky, primarily stimulated the relatively narrow interest of pathologists, amyloidosis has risen full-blown as one of the most important of disease complexes. Its presence dominat:es the lesions of Alzheimer's disease, a disease affecting an estimated 2. 5 million people in the U. S. A. and thereby closely rivaling stroke as the third most common cause of death. If, as it has been de­ scribed, Alzheimer's disease is the "Disease of the Century," then amy­ loidosis is the Disease Complex of the Ages. It affects in one or more of its manifestations every organ of the body, and is at least as old as the afflicted Egyptian mummies of the pyramids. With an increasing percentage of older individuals amyloid of the senior population becomes increasingly more frequent. The subjects covered in this Symposium range through almost every clinical medical specialty. From an average of one paper in each of the past three Symposiums, the explosive interest in cerebral amyloidosis has led to the presentation of 12 papers on this subject in the present volume. The genetically predisposed familial amyloidotic processes, such as the polyneuropathies and familial Mediterranean fever have also stimulated ex­ tensive and intriguing investigations which have revealed the striking effect of a single amino acid substitution in transforming a normal protein into. a lethal "amyloidogenic" one.