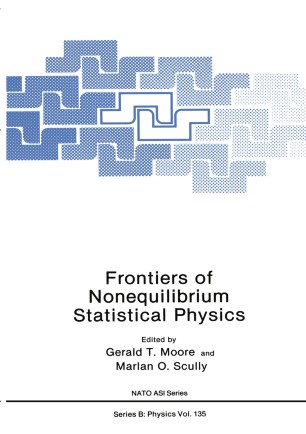 The four-week period fran May 20 to June 16, 1984 was an intensive period of advanced study on the foundations and frontiers of nonequili­ brium statistical physics (NSP). During the first two weeks of this period, an advanced-study course on the "Foundations of NSP" was con­ ducted in Albuquerque under the sponsorship of the University of New Mexico Center for High-Technology Materials. This was followed by a two-week NATO Advanced Study Insti tute on the "Frontiers of NSP" in Santa Fe under the same directorship. Many Students attended both meetings. This book comprises proceedings based on those lectures and covering a broad spectrum of topics in NSP ranging fran basic problems in quantum measurement theory to analogies between lasers and Darwinian evolution. The various types of quantum distribution functions and their uses are treated by several authors. other tools of NSP, such as Langevin equations, Fokker-Planck equations, and master equations, are developed and applied to areas such as laser physics, plasma physics, Brownian motion, and hydrodynamic instabilities. The properties and experimental detection of squeezed states and antibunching are described, as well as experimental tests of the violation of Bell's inequality. Information theory, mean-field theory, reservoir theory, entropy maximization, and even a novel nonlinear generalization of quantum mechanics are used to discuss nonequilibrium phenanena and the approach toward thermodynamic equilibrium.