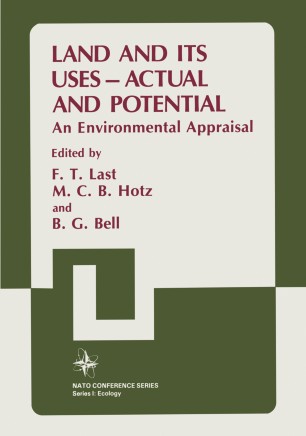 Land and its Uses — Actual and Potential

During its existence the Ecosciences Panel of the North Atlantic Treaty Organisation was constantly concerned with (i) the communic­ ation gap between the generators of ecological/environmental infor­ mation and those who use it and (ii) the narrow interpretation of 'environmental' which too frequently was taken as being synonymous with pollution. Because of this concern, and because the panel recognised that land-use is perhaps the overriding facet of environmental policy it was decided to arrange the Seminar recorded in this volume :- Land and its Uses : Actual and Potential An Environmental Appraisal The development of this Seminar was chaired by Professor F. T. Last who was enthusiastically supported by B. G. Bell (U.K.), Drs S. Bie (Norway), 0. W. Heal (U.K.), R. Herrmann (Federal Republic of Germany), M.C.B.Hotz (formerly of NATO, Belgium, but now in Canada), L. Munn (Canada) and N. Yassoglou (Greece). Together, they decided that the participants should include (i) planners/decision­ makers and (ii) scientists generating ecological/environmental infor­ mation, in the hope that they would gain a better understanding of each others problems and attitudes and as a result identify how information can be prepared in a more usable form.