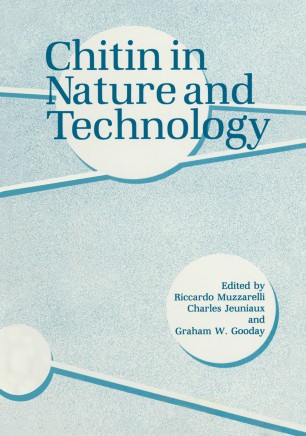 Chitin in Nature and Technology

Exegi monumentum ael'e perennius. The monument I have built will last longer than bronze. Horace My previous book, "Chitin", (1977) was listed by the publisher, as a "key research book", among the most requested books by libraries. It received favorable comments from. each of the journals which reviewed it, Science, 198, 28 Oct. 1977, Physiological Entomology, 2(4), Dec. 1977, The Canadian Institute of Food Science and Technology Journal, April 1978, The Quarterly Review of Biology, 53:361, 1978, Oceanographic Abstracts, 15:182, 1979, Annales de Zoologie-Ecologie Animale, 11:127, 1979, and Enzyme & Microbial Technology, 2, 1980. The variety of these journals testifies to the interdisci­ plinary character of chitin studies. "Chitin" has really been a landmark, to use the definition given by Science, because it stimulated interest in the less known polysaccharides and in modified chitins, besides chitin itself, to the point that three International Conferences on Chitin / Chitosan were convened (Boston, U. S. A. 1977, Sapporo, Japan 1982 and Senigallia, Italy 1985). In convening the 3rd International Conference on Chitin / Chitosan (1-4 April 1985), one of the main objectives was the preparation of the present book. While the proceedings of the previous two Conferences were very valuable, they did not appear in any book catalogs and this severely Ii mi ted their distribution.