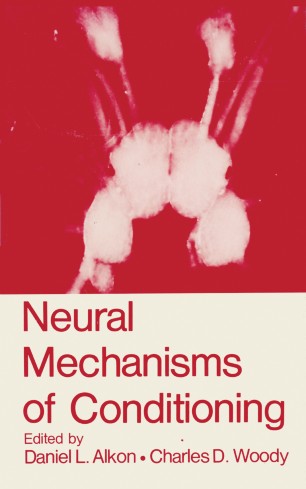 This is the second volume to be based on a series of symposia being held periodically on the neurobiology of conditioning. The first, entitled Conditioning: Representation of Involved Neural Functions was based on a symposium held in Asilomar, Cali­ fornia, in October 1982 (Woody, 1982). The present volume is based on a sym­ posium, organized by D. Alkon and C. Woody, held at the Marine Biological Laboratory in Woods Hole, Massachusetts in November 1983. This series of sym­ posia and their publication are more than justified by the extraordinary progress be­ ing made during recent years in all branches of neuroscience and its application to our understanding of some of the basic neuronal mechanisms of conditioning and learning. Invertebrate models of conditioning have been used by many in the attempt to obtain a more thoroughly controlled analysis at the single cellular and synaptic level of the mechanisms involved in elementary conditioning in a simple nervous system. Examples of this approach are presented in this volume and utilize insects (grasshopper), crustacea (crayfish), and particularly the relatively simple nervous systems of mollusks (Aplysia and Hermissenda). In such preparations it is possible to carry out precise electrophysiological and neurochemical studies of single iden­ tified cells and synapses involved in such simple processes as habituation and sensitization, as well as simple forms of "associative" conditioning, usually using simple aversive or withdrawal reflexes.