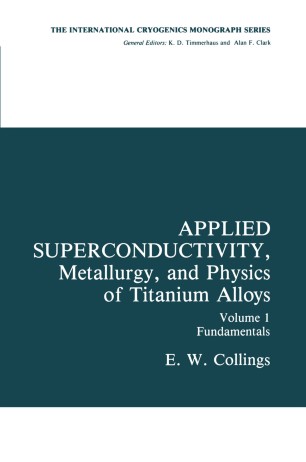 Scope and Purpose Although conductors based on the Al5 intermetallic compound Nb Sn 3 possess desirable high-field superconducting properties, manufacturing and handling difficulties, coupled with the tendency of their critical current densities to degrade rapidly under stress, have generally restricted their use to fairly straightforward, usually small-scale solenoidal-magnet applica­ tions. Likewise the Al5 compound VGa, which has a wider critical strain 3 window than NbSn but a uniformly lower upper critical field, has not 3 entered widespread service. Strain has been found to have no measurable influence on either the critical fields or the critical current densities of compound superconductors with BI and Cl5 crystal structures, but as yet they are still in the research and development stages. On the other hand, conductors using the binary alloy Ti-Nb or multi component alloys based on it, because of their relative ease of manufacture, excellent mechanical properties, and relatively low strain sensitivities, are now being pressed into service in numerous large-scale devices. Such conductors are being wound into magnets for use in energy storage, energy conversion (i. e. , generators and motors), and high-energy particle detectors and beam-handling magnets. of cold-rolled or drawn Ti-Nb-alloy wire for superconducting The use magnet applications was first proposed in 1961. During the ensuing ten years, while progress was being made in the development of Cu-clad filamentary-Ti-Nb-alloy conductors, Ti-Nb and other Ti-base binary transi­ tion-metal (TM) alloys were being employed as model systems in the fundamental study of type-II superconductivity.