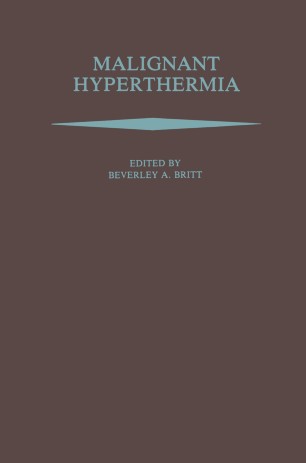 A HISTORY OF MALIGNANT HYPERTHERMIA Malignant hyperthermia (MH) is a hereditary disorder of muscle. Undoubtedly, individuals have possessed this trait since time immemorial. However, because the trait is usually only unmasked in the presence of potent inhalational anaesthetic agents or non-depolarizing skeletal muscle relaxants, the existence of malignant hyperthermia was not suspected until we" after the dawn of the modern anaesthetic era. In the early years of ether and chloroform anaesthesia, monitoring was minimal. Body temperature was never measured. A finger on the pulse, and observation of respirations and skin colour were the most that could be expected. Death was not infrequent and usually unexplained (1). By the beginning of the twentieth century, reports of fulminant fever and tachycardia (rapid heart rate) during or immediately after anaesthesia often ending in death, were being described with increasing frequency in the medical literature (2-6). As a number of cases from New York had occurred during summer months, they were initially thought to be a form of heat stroke due to overly hot operating theatres (2-6). However, one enterprising anaesthetist (5:' checked the weather reports for the days on which some of these so called "heat strokes" had occurred. He found that on the days i'n question the ambient 0 temperature had never been in excess of 72 F. Environmental heat, therefore, could not have been a cause of at least some of these reactions.