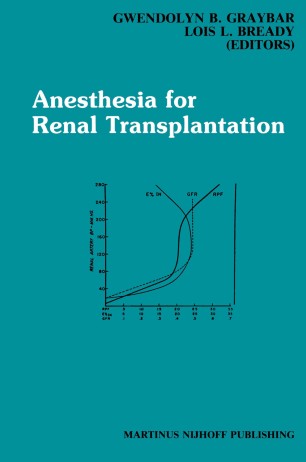 This treatise commemorates the 32nd anniversary of the first successful allogenic kidney transplant in a human being and the beginning of a con­ tinuing challenge for well over a generation of anesthesiologists. If compari­ sons can be permitted, this epoch-making event can be ranked with the first pulmonary lobectomy and subsequently the initial ligation of a patent ductus arteriosus in the late 1930s when thoracic and cardiac surgery began. Was it merely a coincidence that brought these events to the fore so close upon one another after many years of ideation and frustration? Not so, according to Lewis Thomas, for this was the time of medicine's second revolution-its transformation from an empirical art into a powerfully effective science. The remote Galenic conception of disease with its emphasis on disturbed body humors was about to be supplanted by effective therapeutics, as signified by the introduction of the sulfonamides and antibiotics for the specific treatment of infection. Anesthesiology had been dormant up to that era, still relying upon a few agents, more or less utilized from the beginning, and purveyed by a handful of specialists who had not yet begun to ask the scientific questions necessary for their maturation into a bona fide discipline. However, anesthesiology was in­ evitably caught in the ferment, for as Peter Caws observed, "It serves to re­ mind us that the development of science is a step-wise process: nobody starts from scratch and nobody gets very far ahead of the rest.

"... a well-produced monograph dealing with anesthesia a human renal transplantation. The book is comprehensive and is authored by a distinguished group of experts." (Nephron, 50:88, 1988)