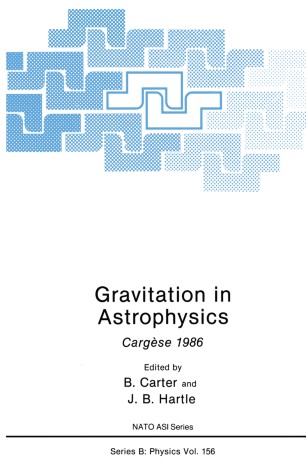 With the discovery of pulsars, quasars, and galactic X-ray sources in the late 60's and early 70's, and the coincident expansion in the search for gravitational waves, rela­ tivistic gravity assumed an important place in the astrophysics of localized objects. Only by pushing Einstein's solar-system-tested general theory of relativity to the study of the extremes of gravitational collapse and its outcomes did it seem that one could explain these frontier astronomical phenomena. This conclusion continues to be true today. Relativistic gravity had always played the central role in cosmology. The discov­ ery of the cosmic background radiation in 1965, the increasing understanding of matter physics at high energies in the decades following, and the growing wealth of observations on the large scale structure meant that it was possible to make increasingly detailed mod­ els of the universe, both today and far in the past. This development, not accidentally, was contemporary to that for localized objects described above.