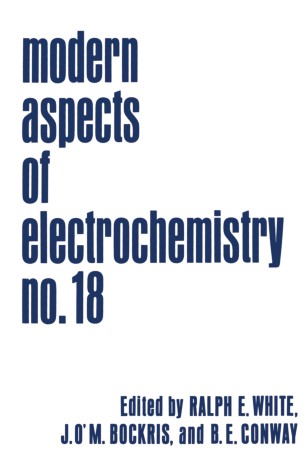 This volume of Modern Aspects of Electrochemistry contains six chapters. The first four chapters are about phenomena of interest at the microscopic level and the last two are on phenomena at the macroscopic level. In the first chapter, Uosaki and Kita review various theoretical models that have been presented to describe the phenomena that occur at an electrolyte/ semiconductor interface under illumination. In the second chapter, Orazem and Newman discuss the same phenomena from a different point of view. In Chapter 3, Bogus­ lavsky presents state-of-the-art considerations of transmembrane potentials and other aspects of active transport in biological systems. Next, Burke and Lyons present a survey of both the theoretical and the experimental work that has been done on hydrous oxide films on several metals. The last two chapters cover the topics of the production of chlorine and caustic and the phenomena of electrolytic gas evol­ ution. In Chapter 5, Hine et al. describe the engineering aspects of the three processes used in the chi or-alkali industry, and in Chapter 6, Sides reviews the macroscopic phenomena of nucleation, growth, and detachment of bubbles, and the effect of bubbles on the conduc­ tivity of and mass transfer in electrolytes.