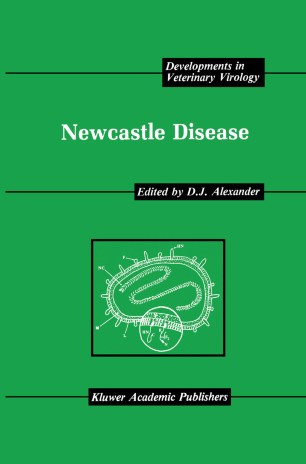 Most of the chapters of this book were written during 1987 which was the Diamond Jubilee year of the publication of the first reports of Newcastle disease in 1927. During the intervening years the nature of the Poultry Industry throughout the World has changed, or is in the process of changing, dramatically from one based on small village or farm flocks, frequently kept as a sideline, to an industry based on large flocks, sometimes consisting of hundreds of thousands of birds, run by multinational companies. To all these flocks, both large and small, Newcastle disease poses a considerable threat to their well-being and profitability and it is not unreasonable to state that hardly a single commercial flock of poultry is raised in the world without Newcastle disease having some effect due to actual disease, prophylactic vaccination or restrictions placed on rearing, movement, processing, sale or export of birds and products. In addition, recent years have produced developments in virology and associated biological technology which would have been unbelievable when Newcastle disease virus was first isolated. The economic importance of Newcastle disease virus and its use as a laboratory model has meant that major advances have been quickly applied to the field situation whenever possible and, as a result, a much fuller understanding, not only of the biochemistry and basic virology of the virus but also the ecology, epizootiology, antigenicity, immunology and other important aspects in the control of the disease has been achieved.

`The book is a must for all those interested in Newcastle disease, be it in the diagnosis and control of an economically important disease of poultry or as a useful laboratory model and Dr. Alexander and his contributors are to be congratualted.'
J.K.A. Cook, The Veterinary Record, April 1989.
Buy options